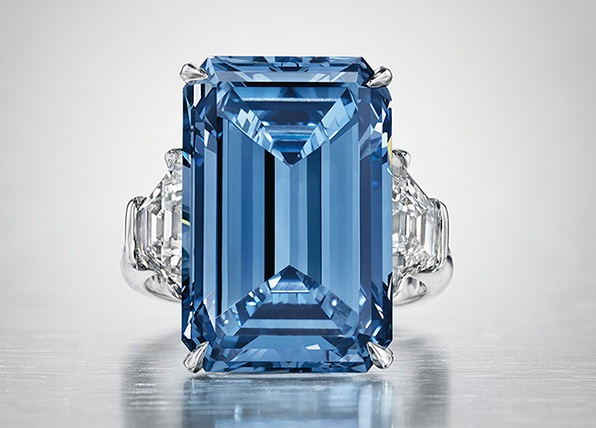 The largest and finest fancy vivid blue diamond ever seen at auction, the Oppenheimer Blue, now also is a record-setter.

The rectangular-cut, 14.62-carat stone sold for $57.5 million at Christie’s Geneva Wednesday, setting a new world record price for any jewel sold at auction. It surpassed the Blue Moon, the 12.03-carat fancy vivid blue diamond that sold for $48.5 million at Sotheby’s Geneva in November.

The person who purchased the Oppenheimer Blue did so over the phone and their name was not released.

The stone’s listing price (what it sold for excluding fees) of approximately $51.2 million topped its highest pre-sale estimate, $45 million.

Bidding for the stone started at $30 million Swiss francs (approximately $30.4 million) and crept up slowly, jumping up by the millions, then at times $500,000 and then even some $200,000 increments before the final hammer came down in Geneva.

With a clarity of VVS1, the Oppenheimer Blue is set in its original “Eight Blades” platinum mounting from Verdura.

This big blue diamond once was owned by someone who knew a lot about them.

Sir Philip Oppenheimer controlled the Diamond Syndicate in London and began working in the family business at De Beers London in 1934, where he sorted and valued diamonds.

Later, as head of the London-based “Central Selling Organisation” for more than 45 years and chairman of the “Diamond Trading Company” branch, he oversaw a diamond sales business set up by De Beers to control the global diamond supply.

The Oppenheimer Blue was highlight of the “Magnificent Jewels” sale in Geneva Wednesday, which totaled $169.5 million.

In addition to the sale of the blue stone, the auction also featured the Superb Jewels from the collection of H.S.H. Gabriela Princess zu Leiningen, which sold 100 percent by lot for a total of $22.5 million.