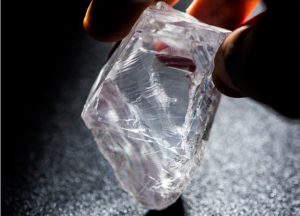 The sixth-largest gem-quality diamond ever unearthed has just been sold for $63.1 million, or $77,649 per carat, setting a new world record for a rough diamond.

Weighing in at 812.77 carats, the Type IIa diamond was unearthed by workers at Lucara Diamond Corp.’s Karowe mine in Botswana, the same mine that yielded the 1,109-carat diamond.

Lucara announced Monday that it sold the 812.77-carat diamond. As part of the sale, the mining company has partnered with Nemesis International DMCC, a Dubai-based rough diamond trading company, and named the diamond “The Constellation.” Lucara will receive 10 percent of the net profit received from the sale of the polished diamonds this stone yields. 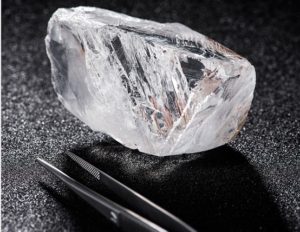 Lucara found the diamond (originally estimated at 813 carats) back in November, just a few days after it unearthed the historic 1,109-carat diamond.

Now called Lesedi La Rona, that rough diamond will be offered for sale in June at Sotheby’s London and is expected to bring in “more than $70 million” Sotheby’s said last week. A sale of $70 million to $75 million would equate to a per-carat price of $63,082 to $67,588 for the Lesedi; at these prices, it will not break The Constellation’s record. However, the stone could sell for more given its historical significance as the second largest gem-quality diamond ever found.

The 812.77-carat diamond came from the south lobe of the Karowe mine, the same area that yielded the 1,109-carat stone.

Also recovered within the 800-carater was a 374-carat diamond.