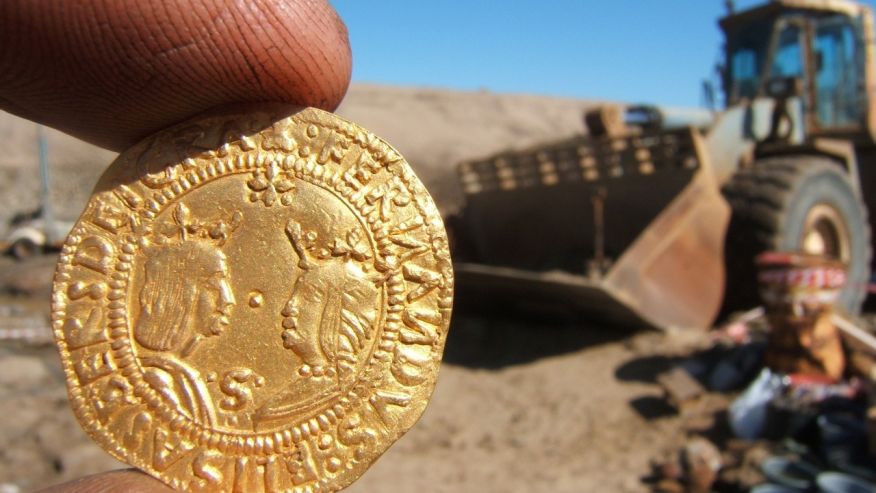 Diamond miners recently discovered a ship that went down 500 years ago after draining a man-made lagoon on Namibia’s coast. While shipwrecks are often found along Africa’s Skeleton Coast, this one just so happened to be loaded with $13,000,000 worth of gold coins.

It also answers a centuries–old mystery and is what some archaeologists are calling one of the most significant shipwrecks ever found.

The wreck was first discovered along the coast near Oranjemund by geologists from the mining company De Beers in April 2008. One reason it took centuries to find is because it was underneath the ocean floor.

“The mining site concerned was actually located in the surf zone, where the violent action of the waves theoretically made mining impossible,” archaeologist Dr. Dieter Noli told FoxNews.com. “So what the chaps do is push up a huge sea-wall with bulldozers parallel to the beach, with the ends running back to the beach.  The result is a large man-made lagoon, with the surf pounding on the outside.  Then they pump the sea-water out of the lagoon.”

It was in this drained lagoon that the wreck was discovered. Noli, who is chief archaeologist of the Southern Africa Institute of Maritime Archaeological Research, wasn’t too surprised– with the abundance of shipwrecks on the coast (Portuguese sailors once called it “The Gates of Hell”), he knew the geologists would turn up something sooner or later.

“Having first started doing archaeological work…for the mine in 1996, I had at that point been preaching to them for a dozen years that ‘one day’ they would find a shipwreck, and to let me know when they do,” he told Foxnews.com. “When asked what exactly I was really expecting to find, I said ‘a Spanish sword and a bag of gold.’” 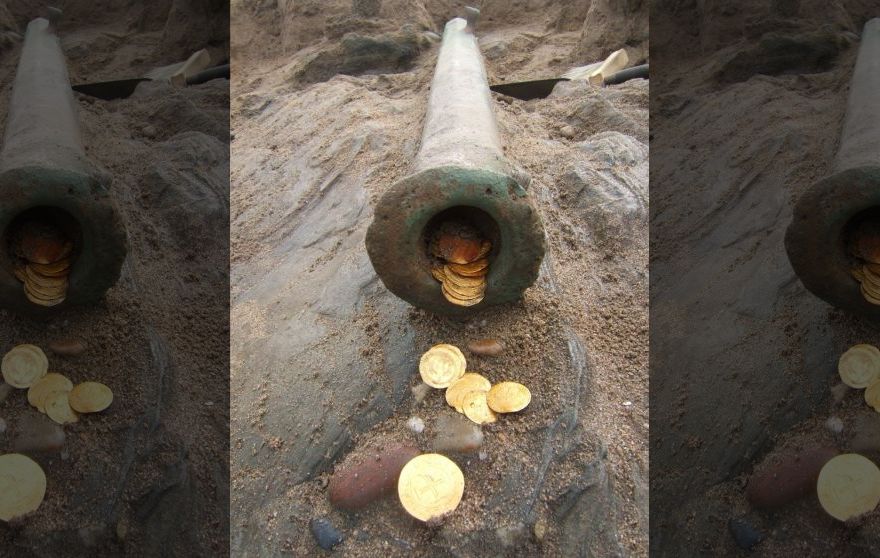 A day after the discovery, the geologists notified Noli that they’d found some ‘strange stuff’ on the beach– bits of metal, wood, copper half-spheres and what looked like copper or bronze pipes. They emailed him an image of one of the “pipes,” which Noli immediately recognized to be a piece of 16th century artillery.

“I phoned [Chief geologist Juergen Jacob] back and told him that said pipes were in fact rather old breech-loading cannons. ‘How old?’ he wanted to know. ‘1535, give or take two months,’ I suggested. Since the ship wound up being from 1533, that was a pretty close guess!”

While there are plenty of shipwrecks in the area, almost all of them are “recent”– as in having sunk only in the last 120 years or so. The oldest shipwreck found in the area at that point was The Vlissingen, which went ashore in Meob Bay in 1747.

Upon his arrival to the site, Noli realized pretty quickly this new find would be the oldest one yet.

“Once [there], the copper half-spheres had me flummoxed,” he said. “But then I saw the wooden stock of a matchlock musket lying at my feet.  Picking it up, I saw that the style of the stock – made to fit against the cheek, rather than against the shoulder – indicated that it was from the early century, matching the age of the cannons. Right then I knew that we had a ship from the early 16th century and that there would be a lot to find in very good nick, because if the stock of a musket survived, a LOT of other stuff would have done so as well.”

Once they realized what they had on their hands, Noli went about trying to convince the Namdeb Corp. to let them work more on the site– no easy task, considering the huge cost of keeping the site dry for two weeks beyond the mining period and maintaining the sea-wall, which is a 24/7 job for two D-9 dozers, a fleet of trucks and some really huge pumps. In the end, he simply let the pictures of spoils from the dig do the talking.

According to Noli, “As luck would have it, we found the treasure chest on day six.  Academic arguments are all very well, but once you have literally filled your hat with an 25.5 lb mixture of Spanish and Portuguese gold coins (there were indeed swords as well), the value of the site is no longer in doubt.”

The ship was identified as The Bom Jesus, or “The Good Jesus”, a Portuguese ship that went missing 500 years ago while en route to India. The ship was loaded down with gold, tin, ivory tusks, and 44,000 pounds of copper ingots when it apparently went to its watery grave. In fact, it was the copper ingots that ended up playing a key role in the wreck’s preservation.

“Marine organisms may like wood, leather book covers, peach pips, jute sacking and leather shoes, but copper really puts them off their food – so a lot of stuff survived the 500 years on the bottom of the sea which should really not have done so,” Noli said. “All this adds up to an extremely unusual situation, which led to truly excellent preservation of an in any event unique site.”

How the ship went down and what it was doing off a notorious stretch of coast famous for its storms and fog remains unknown, though Noli has his theories.

He believes that a combination of too much heavy cargo and poor weather made the captain decide to run the vessel ashore by putting out his bow anchors and slowly beaching her. The ship then hit a blinder in the surf zone, where she heeled over in the pounding waves. All attempts to free her failed and she broke up, starting with the superstructure.

“The treasure chest fell free from the captain’s cabin, sinking intact to the seabed, where it was subsequently crushed, pinned down and protected by a massive piece of the side of the ship which broke free from the disintegrating hull,” Noli theorized.

As for what it was doing off the coast, he’s hoping Portuguese records may shine some light on the matter.

So who gets the gold?

“The Namibian government – every single coin,” he said. “That is the normal procedure when a ship is found on a beach.  The only exception is when it is a ship of state – then the country under whose flag the ship was sailing gets it and all its contents.  And in this case the ship belonged to the King of Portugal, making it a ship of state – with the ship and its entire contents belonging to Portugal.  The Portuguese government, however, very generously waived that right, allowing Namibia to keep the lot.”