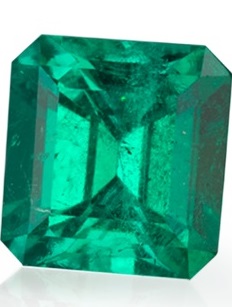 The May birthstone is the Emerald. Emerald is the green to greenish-blue variety of the mineral beryl. The beryl species also includes aquamarine as well as beryls in many other colors. There are other green gems, like tourmaline and peridot, but emerald is the one that’s always associated with the lushest landscapes and the richest greens. Its color reflects new spring growth, which makes it the perfect choice of a birthstone for the month of May.

The first known emerald mines were in Egypt, dating from at least 330 BC into the 1700s. Cleopatra was known to have a passion for emerald, and used it in her royal adornments.The emerald name comes from the ancient Greek word for green, “smaragdus.” Legends stated that if someone placed an emerald under their tongue, they would have the  ability to foresee the future. Emeralds were also meant to reveal truth and protect against evil spells. Emerald was once also believed to cure diseases like cholera and malaria. Wearing an emerald was believed to reveal the truth or falseness of a lover’s oath as well as make one an eloquent speaker.

Come in and see our beautiful emerald jewelry selection!