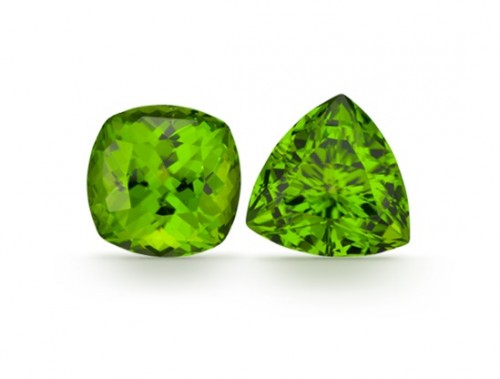 The birthstone for the month of August is the Peridot. Peridot is the gem variety of the mineral Olivine. Its chemical composition includes iron and magnesium, and iron is the cause of its attractive yellowish-green colors. The gem often occurs in volcanic rocks called basalts, which are rich in these two elements.

Peridot has always been associated with light. In fact, the Egyptians called it the “gem of the sun.” Some believed that it protected its owner from “terrors of the night,” especially when it was set in gold. Others strung the gems on donkey hair and tied them around their left arms to ward off evil spirits.

The color range for peridot is narrow, from a brown-green color to yellowish green to pure green. Yellowish green is the most common peridot color seen in jewelry.

Some historians believe that Cleopatra’s famous emerald collection might actually have been peridot. People in medieval times continued to confuse peridot with emerald. For centuries, people believed the fabulous 200-ct. gems adorning the shrine of the Three Holy Kings in Germany’s Cologne Cathedral were emeralds. They are, in fact, peridots.