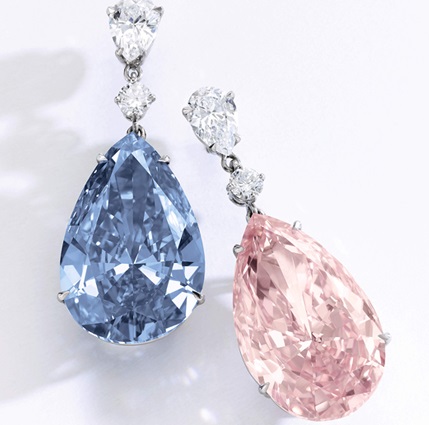 Two non-matching pear-shaped diamond earrings will be up for auction next month, but interested parties will have to pay attention to the bidding on two lots instead of just one.

The “Apollo Blue” and “Artemis Pink” diamonds will hit the auction block at the Magnificent Jewels and Noble Jewels sale at Sotheby’s Geneva on May 16, where they will be sold separately.

Sotheby’s did not respond by press time when asked why the two diamonds, which are paired as earrings, are being sold separately.

The Apollo Blue is a fancy vivid blue diamond that weighs 14.54 carats. The internally flawless, Type IIb stone could sell for between $38 and $50 million. It has been cut and polished into an unmodified pear shape to bring out its color.

The Artemis Pink, meanwhile, is a 16-carat fancy intense Type IIa pink diamond of VVS2 clarity. It’s expected to sell in the range of $12.5 to $18 million. The pink diamond also has been cut into a pear shape.

Sotheby’s named them after Apollo and Artemis, “a twin brother and sister of great power and beauty who were among the most widely venerated of the Ancient Greek deities,” the auction house said in a press release.

They’re the most valuable earrings to appear at auction, according to Sotheby’s, and while the pears might set a new record as a pair, they’re not poised to break any records individually.

The auction record for a pink diamond was set by the 59.60-carat “CTF Pink” last week when it sold for $71.2 million, also making it the most expensive jewel ever sold at auction.

The most expensive blue diamond ever sold at auction is the Oppenheimer Blue. The 14.62-carat fancy vivid blue stone sold for $57.5 million, or $3.9 million per carat, in May 2016.