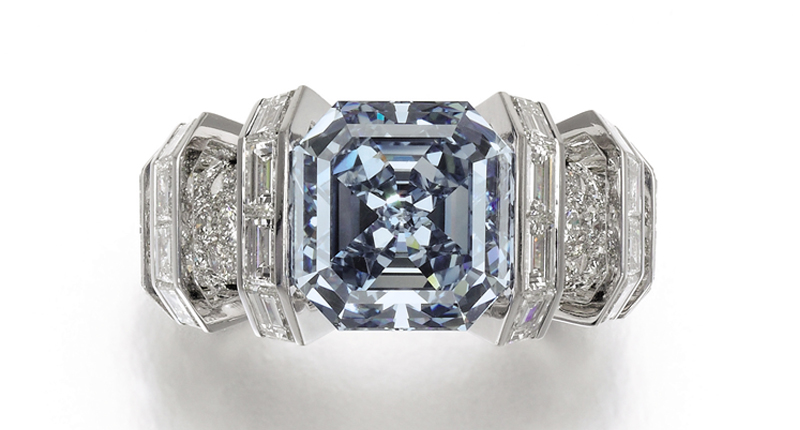 The trend of notable blue diamonds taking center stage at auction will continue next month in Geneva.

An 8.01-carat fancy vivid blue diamond, dubbed “The Sky Blue Diamond” to emphasize its rare hue, will headline the Magnificent Jewels and Noble Jewels at Sotheby’s Geneva on Nov. 16.

Set in a ring by Cartier, it is expected to sell for between $15 and $25 million.

Sotheby’s said the stone has been graded as a fancy vivid blue by the Gemological Institute of America, and also was found to have excellent polish and to be Type IIb.

“The Sky Blue Diamond is a wonderfully clear celestial blue, presented in an extremely elegant square emerald cut–in my view, the most flattering of all the cuts for a colored diamond,” said David Bennett, worldwide chairman of Sotheby’s jewelry division.

Sotheby’s has set a new world record auction price for blue diamonds twice over the past couple of years.

In April, the De Beers Millennium Jewel 4, one of the dozen rare diamonds De Beers assembled to mark the year 2000, sold for $31.8 million at Sotheby’s Hong Kong, making the 10.10-carat oval-shaped fancy vivid blue diamond the most expensive jewel ever sold at auction in Asia.

In November 2015, the auction house sold a 12.03-carat fancy vivid blue diamond called the Blue Moon of Josephine for $48.5 million, making it the most expensive jewel ever sold at auction anywhere. It also set the per-carat record for any diamond, at $4 million per carat.

However, the Blue Moon’s record price ultimately was trumped by The Oppenheimer Blue, a 14.62-carat VVS1 clarity fancy vivid blue diamond that became the most expensive jewel ever sold at auction when it garnered $57.5 million at Christie’s Geneva in May.

Sotheby’s Nov. 16 sale in Geneva also will include more colored diamonds, as well as colored gemstones and period jewels with noble provenance, such as a historic diamond choker from the second half of the 18th century that was in the collection of the imperial Russian family.